If you want to understand, READ THIS 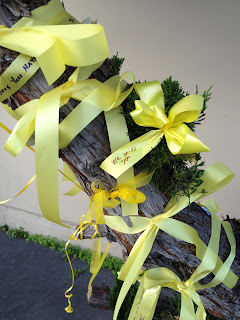 This morning I was doing a google search on Michaela. There are many web sleuthing pages out there that talk about Michaela, and there are so often things I would like to answer but can't. But on one of those pages I came across this comment:

For whatever reason, the mom seems to think Michaela being a sex slave all of this time is preferable to her being dead. I totally get that she doesn't want her daughter to be deceased and never see her again, but the thought of her being raped, sodomized, beaten, and whatever else for over twenty years would be horrible. I guess neither option would be a good one.


I think I have talked about this here and there on this blog. In fact, I think many of my posts kind of hint at this. But answers get lost in the proliferation of words, so I thought I would just lay it all out clearly at least for this moment in time.

First, do I positively believe Michaela is still alive? No, I don't. I fully realize that the most probable scenario is that she died within a relatively short time of her kidnapping. Even more, there have been many times over the last 23 years that I have stated publicly, even to the media, that I thought that might even be the more preferable scenario, because it is absolutely true that I did not want to think of Michaela living a life of prolonged suffering. And yes, whether it be in someone's back yard here in California or in the UAE or anywhere else, I do believe that she would have lived an absolutely miserable life of torture, suffering, grief and sadness. People talk about what I have had to live with for all this time, but hey, that is a walk in the park compared to what Michaela would have had to live with for all this time, if she lived. I am not stupid, and I am absolutely not delusional. While it is achingly difficult to imagine my daughter's death, something I don't ever want to contemplate, it is equally difficult to imagine her life after November 19, 1988.

If she died shortly after her kidnapping, she would have been at peace for the last 23 years. I don't personally have any absolute beliefs about what happens after death. I do not believe in the traditional heaven and hell. I do tend towards the belief in the continuation of the spirit in one way or another. But at the worst, death is sleep and nothingness, and is this preferable to 23 years of torture and abuse?

What I do believe is that it is possible that Michaela is still alive. I feel as though I have said this a hundred times, including in fact in the blog I posted this morning, before I went on my google search. If Michaela is not alive, it doesn't matter what I do, or say, or think. But if Michaela IS alive, it makes all the difference in the world. IF Michaela is alive, she has to know that she is still loved, still wanted, that we are still waiting for her to come home, that we have never ever given up on her. Therefore, this is the only assumption I can operate under. It's like when your child has a fever ... maybe it's nothing, and you can sit home and watch TV ... but maybe it's something serious, and if it is, you need to take her to the doctor. So you go to the doctor, because you have to do what you have to do to assure the best for your child.

Does this make sense?

Awhile ago there was a lot of talk about Shermantine and the wells full of bones, and many people seemed to not like the fact that I said I didn't think Michaela was a victim of the Shermantine and/or Herzog. I was accused of being delusional and many other things, but the fact was that I knew a lot of facts about both that lead and Michaela's case which led to a pretty rational conclusion that Michaela was not part of this scenario. A lot of television reporters wanted me to buy into this lead as well, but I just didn't in my heart or my very rational mind believe that. Just because it's in the news, that doesn't make it true. There are far more plausible scenarios in Michaela's kidnapping, but you don't know about them because they haven't been on the news.

After Jaycee was found, my hopes that Michaela might be alive rose tremendously. Yes, Jaycee went through a lot, but look at her! Look at Elizabeth Smart, or Shawn Hornbeck. Would any one of them rather be dead than where they are today? OF COURSE NOT! I knew Jaycee had been found. I knew her mother had been told, that she was brought here to be reunited with her daughter. And yes, you'd better believe I wanted that for Michaela and for myself. I can't even begin to describe the feelings I experienced during that time. Our police department did a thorough investigation of Garrido and as part of that investigation they searched for bodies buried on his property. I was there at the property while they were doing that search, and when they didn't find anything I didn't feel disappointed that I didn't get a resolution. I felt pure, unadulterated relief.

In the years since then, I have had to question whether I am actually prepared to hear the news that Michaela is not alive. I will admit that. But I know now that if this is the truth, I do want to know it. After all, the truth is the truth, and my ignorance of it doesn't make it any less true. Whatever else it would or would not bring, it would end at least some of the forms of torture I experience at the hands of those few people in the world who want to beat me up either because of my hopes and fears about my daughter.

So if you happen to be someone who knows what happened to Michaela, tell me please. If Michaela could endure it, so can I. Leave an anonymous comment on this blog, or e-mail me at sharon.murch@gmail.com. But please leave enough information to actually bring a resolution, and not just a teaser.

And Michaela, if you are alive, and you are reading this ... well, you can end the torture yourself by at least telling me that you are alive, and whether you are well or not. You too can leave an anonymous comment on this blog. Just let me know you are you by including a piece of personal family information that nobody else would know.