Weddings and Babies, oh my! 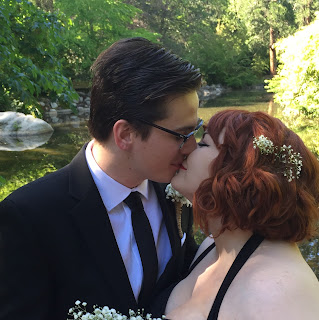 Well, I guess I can now talk about some of what has been going on lately that has kept me so busy. This past week, my youngest daughter was married in Ashland, Oregon. It was a very small wedding, only the closest of family (and not all of those were able to make it to another state for the occasion), and each of their best friends, but it was really beautiful. I enjoyed it immensely, just as I enjoy my daughter and her husband. I think they have a ridiculously romantic relationship. They had actually met before, the two ships who kept passing in the night, brushing against each other occasionally. But it was in Ashland, at the Oregon Shakespeare Festival, that they started the fall into love a little over three years ago. So it was to Ashland that they returned for their wedding, on their third anniversary.

A couple of months ago, they found out that they were going to have a baby. This was quite the surprise. They were very responsible, so much so that it just makes me feel that this baby was meant to be, since it took such a confluence of events and failures for it to happen ... and being the believer in fate and divine guidance that I am. They had been talking about marriage for awhile. In fact, Kane was planning to propose to Johnna this year, on their three-year anniversary. But things got moved up a little because they wanted to be married before the baby comes, so instead they got married that day. 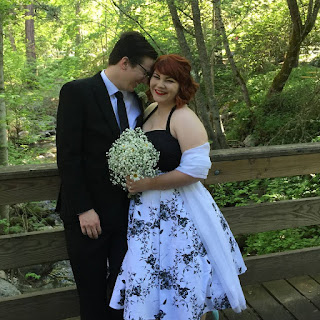 Being young, married, and soon to be parents, the course of their lives is changed, but I believe that will be for the better. I think these two have something to accomplish together in this world, and already things are flowing together to support that.

And, well, I just love them. Of course I love my daughter, but I also really love her husband, Kane, and I am so happy to have him as my son-in-law. He is an exceptional young man, and honestly I have no doubt that they will make it for the long haul, because they just have what it takes to do that. Honest to God, forever after love, no matter what.

And that's all I have to say on this. More next week, on Michaela.

Thank you to all those who have hung in there with me for your love and support.

And to Michaela, I love you forever.
mom
Posted by Unknown at 9:14 PM